Attorney General William Barr in a memo issued on Monday authorized the Justice Department (DOJ) to look into voting irregularities in the 2020 presidential election.

The memo was addressed and signed from Barr to U.S. Attorneys, the assistant attorneys general for the DOJ’s criminal division, civil rights division, the national security division, and the director of the Federal Bureau of Investigation (FBI), Christopher Wray.

“Now that the voting has concluded, it is imperative that the American people can trust that our elections were conducted in such a way that the outcomes accurately reflect the will of the voters,” the memo read.

Barr’s memo comes after 39 House Republicans pressed Barr in a letter on Friday to allow available DOJ resources to look into allegations of voting irregularities across the country in several key battleground states. The Trump campaign has filed a number of lawsuits in some of those states. 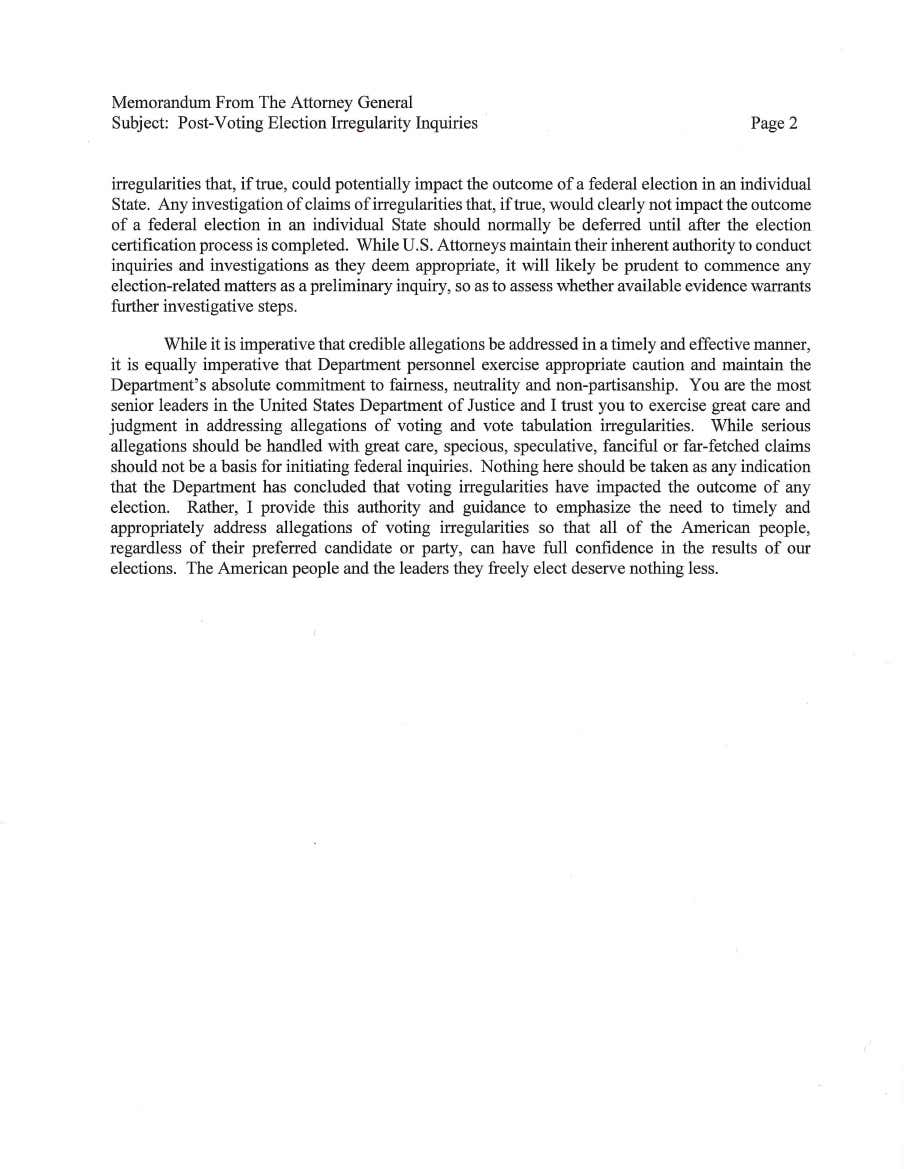 Barr said in his memo that, although the states have the primary responsibility to conduct and supervise elections, the DOJ has “an obligation to ensure that federal elections are conducted in such a way that the American people can have full confidence in their electoral process and their government.”

He added that while “most allegations” of purported election misconduct are of such a scale that they would not impact the outcome of an election that their investigation can be deferred, “that is not always the case.”

He said concerns that overt actions taken by the DOJ in this case are greatly minimized, since the voting has concluded.

He also said he has already authorized the DOJ to pursue substantial allegations of voting and voting tabulation irregularities in specific instances.

“Given this, and given that voting in our current elections has now concluded, I authorize you to pursue substantial allegations of voting and vote tabulation irregularities prior to the certification of elections in your jurisdictions in certain cases, as I have already done in specific instances,” he said.

He said inquiries and reviews may be conducted if there are clear and apparently-credible allegations of irregularities that, if true, could potentially impact the outcome of a federal election in an individual state.

“While U.S. Attorneys maintain their inherent authority to conduct inquiries and investigations as they deem appropriate, it will likely be prudent to commence any election-related matters as a preliminary inquiry, so as to assess whether available evidence warrants further investigative steps,” he said.

He also urged for the DOJ to exercise “great care and judgment’ and not launch inquiries on “specious, speculative, fanciful or far-fetched claims.”

He noted that his authorization of investigations should not be taken as an indication that the DOJ has concluded that voting irregularities have impacted the outcome of the election, but to ensure trust in the voting process.

“I provide this authority and guidance to emphasize the need to timely and appropriately address allegations of voting irregularities so that all of the American people, regardless of their preferred candidate or party, can have full confidence in the results of our elections,” he said.

“The American people and the leaders they freely elect deserve nothing less,” he said.